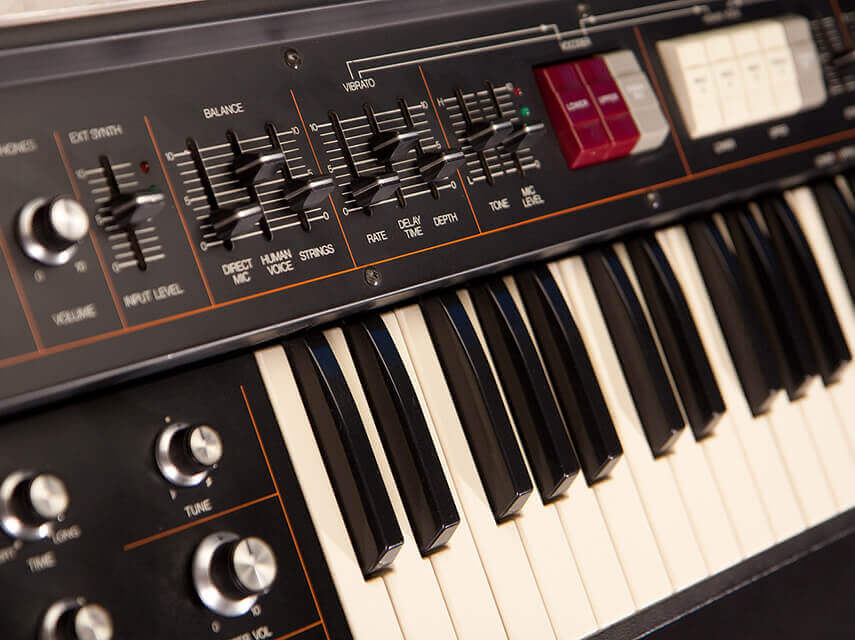 The Original String Machines: A Second History Of String Synths

By 1975, it seemed that new string synths were appearing almost every month. Following in the footsteps of pioneering instruments. such as the Freeman String Symphonizer, the Eminent 310 Unique and the Solina, there many others on the market.

These included Crumar Stringman, the Eko Stradivarius, the Hohner Stringvox, the Logan String Melody, the Roland RS101… and at least a dozen others. But keyboard players craved more than just ensemble sounds, and this was the year in which Yamaha announced what is widely considered to be the greatest and most desirable of all polyphonic synthesisers.

The Yamaha GX-1was physically immense, and had a sound to match. OK… it wasn’t a string synth, but it introduced the string and ensemble sounds that would become widespread when affordable dual-oscillator polysynths appeared a few years later.

The Yamaha GX-1 wasn’t a string synth, but it introduced the string and ensemble sounds that would become widespread a few years later.

At the other end of the scale, some very useable low-cost ensemble keyboards were appearing. Similar in some ways to the Logan String Melody, the Jen SM2007 String Machine (1976) was physically identical to a small range of Vox keyboards sold in the 1970s. This is not surprising. Vox was by this time a brand name of the Thomas Organ Company, which had already rebadged the Logan and sold it in the UK as the Vox String Thing, and it seems that they repeated the exercise with the SM2007, rebadging it as… the Vox String Thing!

The Hohner K4 (1977) was another high-quality string synth with a murky lineage. Released in the USA as the Hohner Stringer, it appeared in Europe as the Hohner String Orchestra and the Elgam String Ensemble. Whether Hohner manufactured any of these is open to question, as all seem to have been linked with Logan Electronics. As for their character… this was rich and lush in the style of the Logans, but with a somewhat different timbre and an unusual Ensemble control that could layer three octaves of the voices, resulting in a mighty sound.

The following year, ARP released what may be the greatest of the so-called ‘multi-keyboards’. Described by one of the company’s directors as a “synthesiser sandwich”, the Quadra (1978) combined four sound generators: a string ensemble and polysynth reminiscent of the ARP Omni II, a dual-oscillator monosynth, and a bass synth. Like many other strings synths, the Quadra’s ensemble sound was based on a divide-down sound generator shaped by a single (paraphonic) AR contour generator, but it benefited hugely from being passed through ARP’s celebrated chorus ensemble. The Quadra was designed in a hurry and rushed out almost in desperation, but it still did some things better than any other instrument.

Described by one of the company’s directors as a “synthesiser sandwich”, the Quadra combined four sound generators–and benefited hugely from being passed through ARP’s celebrated chorus ensemble.

The Farfisa Soundmaker (1978) was a more basic multi-keyboard, with a string section, a limited polysynth, and a simple monosynth. The strings aside, its sounds were rather bland, so it was not a great success and is now extremely rare. Nonetheless, owners are not hesitant to heap praise upon its ensemble sounds. Descriptions include ‘warm’, ‘silky’, and ‘smooth’, and one player described it as “more desirable than a Solina”. That was high praise, indeed.

Even more rare, perhaps, is the Clef Strings. Originally designed as a project for an electronics magazine, this was supplied as a kit by Clef Electronics between 1978 and 1982. It could be a surprisingly attractive and reliable keyboard, and it sounded rather fine, with many useable voices. Furthermore, it was cheap (£179 for the electronics kit and £49 for the case in 1982), but the fact that players had to build it before playing it relegated the Clef to the realms of the electronics hobbyists. Shame.

Like Ken Freeman’s second and fourth prototypes and Korg’s earlier PE-2000, the Korg Lambda(1979) featured three divide-down oscillator banks that allowed players to detune banks A and B against a fixed bank, thus creating a rich ensemble sound. In addition, its Chorus (i.e. human voice) preset slotted nicely into the class of sounds often referred to as Vox Humana. The combination of Chorus, String I and String II is a classic sound, quite different from other string synths.

Appearing the same year, the Roland VP-330 was one of the classic keyboards of the late 1970s, and its Strings and Human Voice sections generated some of the most recognisable sounds of the era. With just one footage, the Strings sound was generated by a single divide-down oscillator bank passed through Roland’s fabled ensemble unit. Enveloping was very basic; it offered variable Release, but its Attack was paraphonic, which could result in a ‘sucky’ and artificial sound. Nonetheless, the VP-330’s strings were remarkably useable, and some players even dumped their Mellotrons in favour of the little Roland!

One of the nicest ‘pure’ string synths ever released, the Godwin Model 749 String Concert (1980) was another to show Logan-esque characteristics. Like the String Melody II, it offered ‘cello, viola and violin registrations, plus attack and release controls with wonderful, slow maximum times and, best of all, true polyphony rather than the paraphonic architecture of so much of the competition. However, improving upon the Logan, the 749 had fully variable modulators so, instead of offering preset voices, it allowed players to control the ensemble effect, making it far more subtle than other string synthesisers.

One of the nicest ‘pure’ string synths ever released, the Godwin Model 749 String Concert offered true polyphony as well as allowing players to control the ensemble effect.

By 1981, polysynths had become affordable, and the dividing line between string synths and polysynths was becoming very blurred. The core of the Firstman FS-4V was a four-voice synthesiser with individual oscillators, filters and amplifiers for each voice. However, unlike conventional oscillators, the voice boards in the FS-4V incorporated a divide-down section tapped at multiple octaves for a string ensemble sound. Unfortunately, the instrument proved to be rather unreliable, which is a shame because, when working, the FS-4V was capable of some interesting and unusual string sounds.

The Teisco SX-400 (1981) was another Japanese instrument that failed to make a significant impact. This was also a 4-voice polysynth at heart but, unlike the Firstman, it was built like a tank. What’s more, it featured a whooshy, noisy ensemble effect that produced some of the lushest sounds of any string synth or ensemble. Had it appeared in the mid-70s, it might have become a classic, but it was at least five years too late to do so.

By 1982, it was becoming difficult to sell a ‘pure’ string synthesiser or ensemble, and manufacturers were repackaging all of them as multi-keyboards. As you might glean from its name, the Crumar Trilogy sported three sound creation sections: String, Organ, and Synth. Given the company’s pedigree in this area, it wasn’t surprising that the strings were warm, even though the sound was hampered (again!) by a paraphonic architecture. Unusually, a number of the controls in the synthesiser section also acted upon the strings. These included frequency modulation (vibrato) and four types of pitch-bend for bowing effects.

The Sequential Prelude – a repackaged Siel Orchestra 2 – was perhaps the most surprising string synth to appear that year. Mind you, its lineage shouldn’t be held against it; Siel manufactured many low-cost string synths, and the ARP Quartet had been a repackaged version of the original Siel Orchestra. But the later model had a huge advantage over the former – a 5-band equaliser made it capable of producing a much wider and more interesting range of string sounds.

The Technics SX-K200 seemed to be destined for the toy bins at first, but a closer inspection showed that it anticipated the direction keyboard technology would take in the 1980s.

Perhaps the most interesting keyboard of 1982 was the Technics SX-K200. At first sight, this seemed to be destined for the toy bins occupied by Bontempi organs in the 1970s, but a closer inspection showed that the it was an important instrument that anticipated the direction that much of keyboard technology would take in the 1980s. Most importantly, the SX-K200 was the first keyboard to include PCM samples as part of its sound generation. Nonetheless, its Orchestral Presets were generated by Technics’ analogue organ technology, so the SX-K200 also qualifies as one of the last of the analogue string ensembles!

Before releasing the DX7, Yamaha released two (relatively) low-cost digital keyboards for the domestic market. One of these was the CE25 Combo Ensemble (1983), which included three FM-generated strings voices among its twenty presets. Surprisingly, the CE25 was both velocity- and pressure- sensitive, and it offered a Symphonic Depth control that determined the amount of chorusing applied to the sound. The results could be superb, and even today the CE25’s strings can hold up their heads in respectable company.

Rather than emulate the rich sounds of the classic Italian string synths, the EM25 produced another flavour harsh, but often interesting string ensemble sounds.

The Sequential Circuits Fugue (1984) was probably the last ensemble synth released in Europe, Japan or the USA. However, production of this type of instrument continued for many years behind the Iron Curtain. The free world new little or nothing of the Electronica EM25 and numerous other instruments built in Soviet Russia and the DDR before the wall came down, but it later proved to be a combination of a string synth, a limited organ and a basic polysynth. The EM25 was far from ‘lush’ and, rather than emulate the rich sounds of the classic Italian string synths, it produced yet another flavour of rather harsh, but often interesting string ensemble sounds.

Legal Notice
All product names used in this product are trademarks of their respective owners and are in no way associated or affiliated with GForce Software Ltd. These trademarks of other manufacturers are used solely to identify the products of those manufacturers whose tones and sounds were studied and or recorded during development of this product.
© Gordon Reid